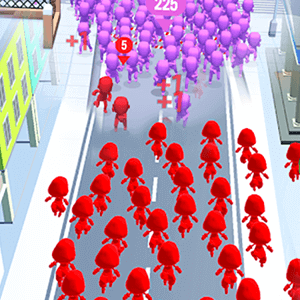 Crowd City 92
Become the biggest Crowd Run - City Of Wars in town!
Be the greatest. Destroy your opponents and be king.
The goal of the game is to create in a short time the largest crowd on the map, the biggest than of all other groups.
Simple Crowd Run - City Of Wars. This game is about bringing people together. To attract a neutral person member in your ranks, you only need to go to him. He only thanks to your talent of faith to join you and become the same color as you.